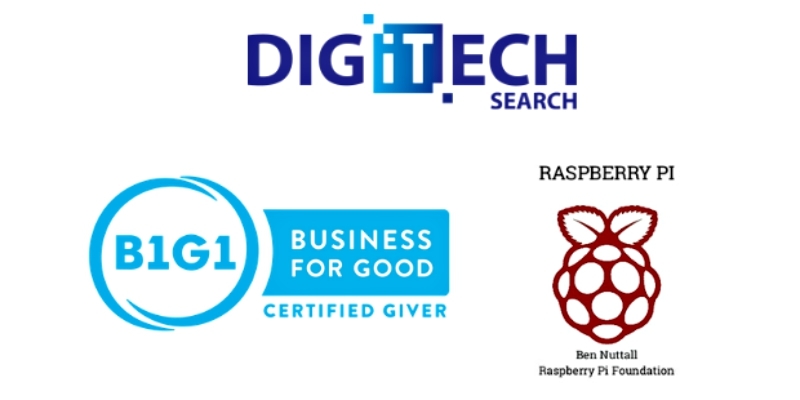 Here at DigiTech, we are proud to announce two new partnerships with carefully selected charities that are close to our heart.

The first partnership we have made is with the Raspberry Pi Foundation contributing towards code clubs for children.

As a business, we are tasked with solving a number of hiring problems for digital & technical people for our clients across Europe. We are only too aware of the demand for these professionals with no indication of this slowing down. In fact, in software development in Europe alone the demand could not be higher with 2 to 3 positions open for every 1 developer available. We are already in a digital revolution and we believe that everything we do in the future will be driven by technology and is why we want to help the industry cope with the demand.

We have partnered with The Raspberry Pi foundation because it is an educational charity with the mission to put the power of computing and digital making into the hands of people all over the world.

The Raspberry Pi Foundation was established in 2008, when the founders recognised that too many of us had become digital consumers rather than digital makers. They were inspired to create a new product: the Raspberry Pi - a low-cost programmable computer to introduce young people to computing.

With a lack of investment in high-quality computer education in schools, over many years, coupled with the huge growth in technologies that engage people as users rather than makers, has limited the opportunities for young people to create with digital technologies. Along with solving our clients hiring problems today and the demand for tech professionals only ever-increasing we also want to be part of solving the tech hiring problems of tomorrow. We have pledged to donate a percentage of our profit from every placement we do in today’s hiring, for the education of tomorrow’s talent that will go towards Code Clubs for children.

Code Club is a global network of after-school clubs where more than 200,000, 9 to 14-year-olds learn to code and build their ideas. Code Clubs are led by teachers, educators and volunteers, supported by a community team. Volunteers help the young people in their club to improve their programming skills and create their own games, animations, and websites.

Code Clubs have access to over 200 free, online projects which are available in 26 widely spoken languages. Projects introduce young people to coding concepts in a fun and accessible way. These step-by-step projects guide young people to progressively build their knowledge in coding languages such as Scratch, HTML/CSS, and Python.

The second partnership we have made is with B1G1 to contribute to the UN’s Global Goals.

In 2015, world leaders agreed to 17 goals for a better world by 2030. These goals have the power to end poverty, fight inequality and stop climate change. Guided by the goals, it is now up to all of us, governments, businesses, civil society, and the general public to work together to build a better future for everyone.

Here at DigiTech, we know we live in an area of the world today where we are privileged to be in the position we are in and that we have the power together with our clients to create a better world for everyone who lives in it.

Each consultant within the business will select from one the 17 sustainable development goals that speak to them the most and from every placement they do, we will make a donation to a number of projects inside the goals such as helping a child benefit from a pop-up school in Indonesia to providing bookkeeping skills for a woman in Malawi or providing safe drinking water to a family in Cambodia.

We are super proud to be partnered with both charities & being able to give back to the tech community and to make a dent on some of the UN’s global goals.