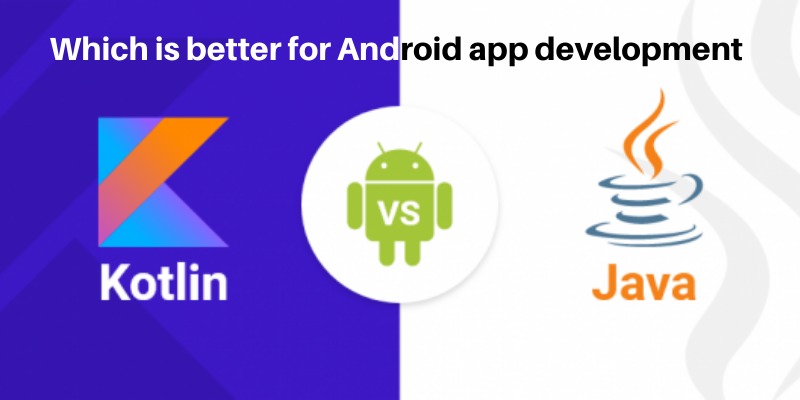 Java vs. Kotlin: Which is the Better Option for Android App Development?

The Kotlin programming language has seen an exponential rise in the development world, with developers recognizing the benefits of its implementation. As of 2019, The Kotlin mobile app development community continues to expand. A few years ago, Google’s acknowledgment for Kotlin made it the second official language for Android app development, topped only by Java.

With this announcement, Google positioned Kotlin as their preferred language for app development. For android app developers, this was a sign of a significant transition. At its core, Kotlin’s purpose is to provide developers an easier to use, less text-bulky and more intuitive development language.

Kotlin is a statically typed programming language for Java Virtual Machine (JVM) and JavaScript. As a general-purpose programming language, it introduced new a set of new functional features to support Java interoperability. This allows a Kotlin-based code to read and interpret a code written in Java. This is because Kotlin is based on Java’s own library, with additional extensions to make it a more compact solution.

The goal of Kotlin was to increase the productivity of the development cycle. By making a language that is concise and easy to implement. This would not just save time but also cost and effort, making the coding process significantly less strenuous.

The improvement in the coding syntax with the requirement of simpler expressions reduces boilerplate code. This fulfills a long-existing wish from Android developers, making their work a lot easier. This is especially effective for mixed-language projects, enabling developers to have a lot more freedom in the process.

On the other hand, Java is an old-school classic. This programming language has a vast library of open-source tools and libraries for developers to deploy. For an extensive period of time, Java has been the leading Android app development language. Java app development has integrated itself within development teams, with everyone using it for their projects.

Java is a great language for both native. For cross-platform development, employing platforms that support it is another debate that we have answered.

In addition to that, Android is built on Java. This allows developers access to Java libraries for help.

Kotlin as a Modern Solution.

One of Kotlin’s primary objective was to attain accessibility on all platforms. A simple concept of face value, Kotlin’s mission goes a lot deeper. It aims to make sharing code between all platforms possible and accessible. Kotlin 1.3’s release was a step in the right direction with improvements to Kotlin/Native advancing the multi-platform convenience.

By no means is this improvement ideal. With Kotlin, which is a modern language, still being optimized through innovation there is a lot of room for improvement. Though the trend shows that for Developers, Kotlin is a step in the right direction.

Some of the more recent innovations have made mobile app scalability more attainable by supporting the ability to reuse code to substantially save time and effort. This allows developers to focus and spend extra time on far more challenging tasks.

The modern market trend seems to believe in Kotlin’s promise. Trends show enterprise leaders and mobile platforms switching to Kotlin for Android Applications. Some of the biggest industry names include Twitter, Airbnb, and Netflix.

Let’s take a deeper dive into the specific benefits of Kotlin to answer the question: What is the difference between Kotlin and Java:

Kotlin is Concise and Simple.

Amongst many things that Java is famous for, the conciseness of its code is not one of them. This is a real thorn in the side of developers.

Here, Kotlin gives them the best. Not only is Kotlin far more concise, but the readability it provides is also clearer.

The less text-intensive Kotlin’s text limitation comes with the ability to read and understand the coding better.

This allows developers to change, edit, or enhance a product with relative ease as opposed to Java.

This reduction of boilerplate code solves a big problem for developers, for whom checking for errors is incredibly hard. To identify and rectify bugs and mistakes takes a lot of time. With Kotlin, this becomes much easier.

To comprehend the extent to which Kotlin helps reduce coding to save time is self-explanatory through the image above. Notice how even from a mere glance at the two sides, you can notice a drastic difference.

This difference is perhaps one of Kotlin’s greatest achievements in terms of its goals. Here the ability to scan and identify bugs and make necessary changes is easier, with both the codes giving the same functional result.

One of them is just simpler, easier, and more intuitive than the other.

At its core, interoperability has been the main focus of Kotlin. Making every library accessible to Kotlin programmers to help them use existing knowledge to deliver better results.

Developers can simply write modules in Kotlin that functions seamlessly with the existing Java Code. A Kotlin compiler allows the two languages to work in unison in the same project, by emitting the Bytecode.

This is an important factor of consideration for developers who are in the process of transitioning from Java to Kotlin. In its absence, the transition would be a paramount shift.

Kotlin’s comes with an inbuilt Null safety feature. The NullPointerException is largely responsible for the mistakes within the app development process. In Android, a null represents a missing value, but null can easily throw all of the hard work out of the window in an application.

With Kotlin, this problem is solved through the integration of inherent null safety. This makes the need for writing extra code for workarounds redundant and unnecessary. For developers, this is perhaps the worst part of their work, which is now automated.

For laymen, you could say that Kotlin is just simply smarter than Java with problem-solving and creating process optimization.

The Business Benefits of Switching to Kotlin

Redoing large portions of a project in a new programming language is a serious decision; however, Kotlin offers two indispensable business benefits impacting the decision.

For Businesses, Kotlin’s succinct nature of coding is a great asset. It saves time in development, code modification, code reviewing and bug fixes.

This allows them to reduce both the project timeline and cost, giving them a significant competitive edge.

This is important in today’s competitive market to be able to perform better than competing businesses.

For developers, app crashes are a heartache. With Java’s extensive coding, it means more than just the existence of an error.

It also means the need to spend a large amount of time to go through the code to identify the mistake. The bigger the code, the more hidden the error in the coding.

With Kotlin, this precise code allows for an easier time to fix bugs and crashes and provide long-term support.

It also allows for the application interface to be far cleaner as opposed to Java programs, due to the programmers having a greater sense of control and clarity during the development process.

Should you switch from Java to Kotlin?

In terms of pure benefits, Kotlin is definitely a better language for android app development. The Kotlin vs Java debate is fought on two fronts. First, let’s discuss the present.

Kotlin being a relatively new language does have information gaps. These gaps can often lead to a problem-solution gap for developers. While the community is growing and more information is being cultivated, in comparison to a classic like Java, it is still maturing.

This could lead to a few problems for developers who might not know how to solve certain problems using Kotlin that they could solve with Java.

The second front is the future. Kotlin is the future, with its immense benefits, lower workload, and easy functionality, it is a developer’s choice of language. As the community for Kotlin grows, its popularity has skyrocketed in the industry. The increase in code lines from 2.1 to 10 million in just one year from 2016–2017 marks the rise in Kotlin’s popularity.

Here, the question becomes, is Kotlin Replacing Java? The predication of Kotlin on improving upon Java makes it an evolutionary inevitability that it will most likely replace Java in the long run. Thus, the need to prepare for the switch is necessary. Eventually, the need for this switch can become imminent and to gain a competitive edge, businesses will have to switch.

Based on this, if not an immediate switch, companies and businesses need to start preparing for one. Switching from Java to Kotlin can lead to some problems with product architecture due to class deletion and other implications.

This is why the measure needs to be carefully handled and it needs to be analyzed whether a team is ready for this switch or not. Switching in a sustainable and gradual manner might be the best way to go about this, for a complete transition over a period of time. This time can be used to assess market trends, Kotlin’s evolution and its eventual position in the industry for a better-informed decision